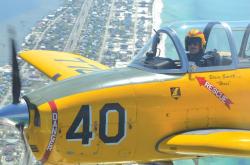 One of the Lima Limas flies over Pensacola Beach on Friday. Photos by Mat Pellegrino | Gulf Breeze News Editor’s Note: Two members of the Gulf Breeze News staff were invited to take a ride on a Lima Lima, one of the aircraft that flew during the Pensacola Beach Air Show last week. These are firsthand accounts of the flights by the two staff members Bri Taylor and Mathew Pellegrino.

Never judge a bird by its color

When I step aboard any plane, the Foo Fighters song “Learn to Fly” plays on repeat in the back of my head. I love the thrill, the view and the feeling of being up in the air.

My past experiences with planes are very limited. Most are encounters with Boeing 777, packed with dozens of passengers, little leg room and the always constant fight over who will get the most elbow room on the arm rest.

While I wasn’t fighting over elbow room aboard the Lima Lima, one of the many planes set to fly in the Pensacola Beach Air Show, I did have the challenge of bringing a 5-lb. camera aboard, and quickly lost my appetite.

Passengers inside the Lima Limas get a first-hand look at what the pilots see up front. Why?

Because I figured at some point I was going to be reaching for a barf bag. But I soon found out that wasn’t the case.

During my flight briefing flight, I was assured this would be a gentle cruise over the clear waters and white sands of Pensacola Beach.

I’ve flown into my home town of Washington, D.C. on several occasions, but have never seen Pensacola Beach from up high.

Preparing for the flight was easy. I was told to strap in to the plane’s seat and enjoy the ride. The only difference was, there wasn’t a stewardess showing me how to properly restrain my seatbelt. That was the pilot’s job. And there was no emergency exit. The problem was, there were a total of five different straps that went up, over and around my body., probably keeping me from getting up and changing my mind about flying. But once I got situated, it was pretty comfortable.

The Lima Limas flew over the beach during the Pensacola Beach Air Show on Friday and Saturday. The take off was smooth. I was in the front of the pack of five with Ltc. Skip Aldous. Plane number 15. Behind me during take off were four other aircraft, two to my left, and two to my right at all times.

The take off in the Beech T-34 Mentor was not like a Boeing 777. It was smooth, and didn’t pull me back too much. What did pull me back was once we got in the air, I looked over and could practically touch the plane next to me.

While I have flown over Escambia Bay, there’s nothing like seeing the Pensacola Beach Ball water tower and the bird’s eye view of Fort Pickens.

The Mentor was the brainchild of Walter Beech, who wanted the airplane to essentially replace North American T-6/SNJ trainer, which was being used to train pilots during World War II. Beech eventually got his wish and the T-34 entered United States Air Force service (T-34A) in 1953 and then Navy service (T-34B) in 1955.

With a length of just over 28 feet and a wingspan topping 33 feet, the plane, one of over 2,300 manufactured, flew smoothly through the clear blue skies.

During flight, Ltc. Aldous didn’t pull those speeds, thankfully. He did, however, pull a few quick turns and maneuvers that caught me off guard … and almost knocked me out.

Thankfully, I regained my manhood and puckered up to look at the beautiful views of Pensacola Beach and Pensacola in general.

As we flew over the beach, I glanced at the white sands, sprinkled with lawn chairs and umbrellas.

After a good 30 minutes in the air, Ltc. Aldous let the other pilots in the Lima Lima group head home. But before landing, Aldous wanted to pull one last prank on me. When he pulled wild maneuvers during the flight, he never warned me. That resulted in me grasping for the nearest handle or my chest.

And as we approached the landing strip, the sweat on my forehead started to dry. I was sure my own two feet were about to be back on solid ground – that I planned to kiss. But Aldous wasn’t going to let me off that easy.

As we approached the runway, he pulled the joystick up hard, causing my eyes to roll up into the back of my head; and then readjusted the plane. I’m sure he got a kick out of it.

The Lima Lima crew proved to be a fun-loving group of young men who enjoy the feeling of being high in the skies, and the adrenaline of pulling back on a joystick to scare the hell out of their passengers.