Meet my neighbor and golfing buddy Denny Wisely who is a retired admiral, former lead of the Blue Angels (the A4 Skyhawk), Captain of the USS John F. Kennedy aircraft carrier and credited with two kills in Vietnam during his 350+ missions. When he got his wings at Pensacola, rather than go into jets, he spent one year and over 800 hours instructing in the T-34. He had not flown the mentor since then and muscle memory kicked in for his flight around Scottsdale.
Read Denny’s just published book on Kindle “Green Ink: Memoirs of a Fighter Pilot.”
The paper copy just came out on May 6th and is available on Amazon. 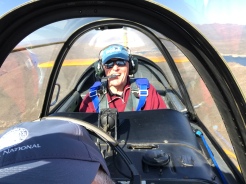 ” Here is the intro to the book:

The biography of a navy fighter pilot who started out from immature, shaky beginnings. He found himself in the navy while growing up during Vietnam. He was the first to shoot down two enemy airplanes and flew 350 combat missions during three deployments aboard USS Kitty Hawk. The ledger he kept will bring you right there with him as he recounts many of those more than exciting missions including being shot down near Hanoi. He flew F4 Phantom to 85,000 feet during operational test flights at the McDonnell-Douglas factor in St Louis. Later at VX-4 in Pt Mugu, California he tested the F 14 Tomcat and flew the MiG 21 from Area 51. He went on to command a Fighter Squadron from USS Midway home-ported in Japan and then went on to be Flight Leader and Commanding Officer of the Blue Angels. He went on to Command the aircraft carrier John F Kennedy.

By limaflight in Uncategorized on May 2, 2018.
← Four Ship Echelon Over Mount Rushmore Challenge Coin Mount for Your Motorcycle →